Ediston is pleased to announce that the joint venture partnership with Europa Capital LLP, the general partner of Europa Fund IV, has completed a new 10 year lease to ‘Tapi Carpets & Flooring’ at Pasteur Retail Park in Great Yarmouth. Their unit totals 5,000 sq. feet and as a result the Park is now 100% occupied. This is Tapi’s first retail warehouse unit with plans to open 20 stores in 2015 and a further 40 stores in 2016. 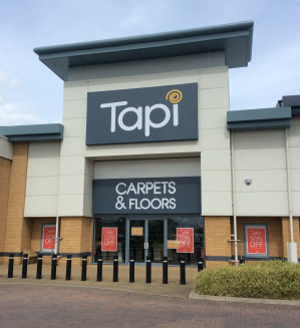 Commenting on the transaction, Graham Lind, Investment Manager at Ediston, said: “The letting to Tapi introduces an exciting new retailer to the Park and completes the immediate goal of achieving a fully let asset, maintaining Pasteur Retail Park as the prime Park in the area”.

Rob Sim, Partner and Head of Northern Europe at Europa Capital LLP, commented that: “The letting successfully achieves a 100% occupancy rate within 3 months of acquisition and adds to the tenant mix of the Park”.

The letting successfully achieves a 100% occupancy rate within 3 months of acquisition and adds to the tenant mix of the Park.